The phrase The Long Tail was first coined by Chris Anderson in a 2004 article in Wired magazine [1] to describe certain business and economic models such as Amazon.com or Netflix. The term long tail is also generally used in statistics, often applied in relation to wealth distributions or vocabulary use.

The long tail is the colloquial name for a long-known feature of statistical distributions, Power laws, Pareto distributions and/or Lévy skew alpha-stable distributions. The feature is also known as heavy tails, power-law tails or Pareto tails. Such distributions resemble the accompanying graph.

In these distributions a high-frequency or high-amplitude population is followed by a low-frequency or low-amplitude population which gradually "tails off". In many cases the infrequent or low-amplitude events—the long tail, represented here by the yellow portion of the graph—can cumulatively outnumber or outweigh the initial portion of the graph, such that in aggregate they comprise the majority.

Such distributions are surprisingly common. In standard English, the word "the" is the most common word and other short words such as "of", "is" and "have" are also quite common. These common words are vastly more common than most other words. For example, about 12% of all words are "the" (while "barracks" occurs less than 1 out of 50,000 words), but cumulatively, words roughly as rare as "barracks" make up about a third of all text. These rare words are the long tail in English vocabulary. [2]

The Long Tail by Chris Anderson[]

The phrase The Long Tail, as a proper noun, was first coined by Chris Anderson. The concept drew in part from an influential essay by Clay Shirky, "Power Laws, Weblogs and Inequality" that noted that a relative handful of weblogs have many links going into them but "the long tail" of millions of weblogs may have only a handful of links going into them. Beginning in a series of speeches in early 2004 and culminating with the publication of a Wired magazine article in October 2004, Anderson described the effects of the long tail on current and future business models. Anderson later extended it into the book The Long Tail: Why the Future of Business is Selling Less of More (2006).

Anderson argued that products that are in low demand or have low sales volume can collectively make up a market share that rivals or exceeds the relatively few current bestsellers and blockbusters, if the store or distribution channel is large enough. Examples of such mega-stores include the online retailer Amazon.com and the online video rental service Netflix. The Long Tail is a potential market and, as the examples illustrate, successfully tapping in to that long tail market is often enabled by the distribution and sales channel opportunities the Internet creates.

A former Amazon employee described the Long Tail as follows: "We sold more books today that didn't sell at all yesterday than we sold today of all the books that did sell yesterday." In the same sense, the user-edited internet encyclopedias or Wikis has many low popularity articles that, collectively, create a higher quantity of demand than a limited number of mainstream articles found in a conventional encyclopedia such as the Encyclopædia Britannica.

The term is derived from the XY graph that is created when charting popularity to inventory. For example, in the graph shown on this page the total inventory of Wikipedia articles is along the bottom line, while the popularity rating (web page hit statistics) is along the vertical axis. So, for example, the Wikipedia homepage would receive the most views and be on the far left in the red, while this page might be on the far right in the yellow, as would most of Wikipedia's articles. The same could be said for Amazon's book inventory or Netflix's movie inventory. The total volume of low popularity items exceeds the volume of high popularity items.

Relationship with storage and distribution costs[]

The Long Tail has possible implications for culture and politics. Where the opportunity cost of inventory storage and distribution is high, only the most popular products are sold. But where the Long Tail works, minority tastes are catered to, and individuals are offered greater choice. In situations where popularity is currently determined by the lowest common denominator, a Long Tail model may lead to improvement in a society's level of culture. Television is a good example of this: TV stations have limited time slots, so the opportunity cost of each time slot is high; stations therefore choose programs that have the broadest appeal. But as the number of TV stations grows or TV programming is distributed through other digital channels, the choice of TV programs grows and the cultural diversity rises.

Some of the most successful Internet businesses have leveraged the Long Tail as part of their businesses. Examples include eBay (auctions), Yahoo! and Google (web search), and Amazon.com (retail) amongst the majors along with smaller Internet companies like Audible (audio books) and Netflix. 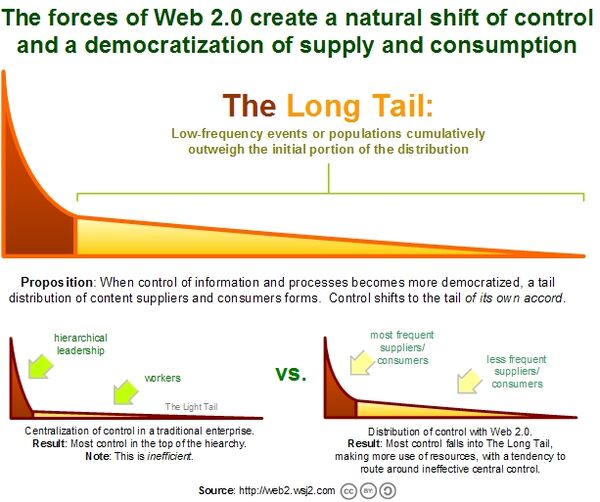 Competition and the Long Tail[]

The Long Tail may threaten established businesses. Before a Long Tail works, the only products on offer may be the most popular, but when the costs of inventory storage and distribution fall, then a wide range of products becomes available; that can, in turn, have the effect of reducing demand for the most popular products. For example, Web content businesses with broad coverage like Yahoo! or CNET may be threatened by the rise of smaller Web sites that focus on niches of content, and cover that content better than the larger sites. The competitive threat from these niche sites is related to the cost of establishing and maintaining them and the bother required for readers to track multiple small Web sites. These factors have been transformed by easy and cheap Web site software and the spread of RSS.

In his Wired article, Anderson cites earlier research by Brynjolfsson, Hu, and Smith, who quantified the potential value of the long tail to consumers. In an article published in 2003 these authors show that, while most of the discussion about the value of the internet to consumers has revolved around lower prices, consumer benefit (a.k.a. consumer surplus) from access to increased product variety in online book stores is ten times larger than their benefit from access to lower prices online. Thus, the primary value of the internet to consumers comes from releasing new sources of value by providing access to products in the long tail.

The Long Tail and Scale-Free Networks[]

The long-tail distribution (a few things rated many times, many things rated a few times) may be modeled by scale-free networks. In particular, its shape may be a "power-law" curve. Also, one of the "generative models" for a scale-free network ("the rich get richer") may be a sensible way to explain the long-tail distribution. For example, a book that has been bought many times will tend to be bought more, because more people will hear about it.

Community content is available under CC-BY-SA unless otherwise noted.
Advertisement